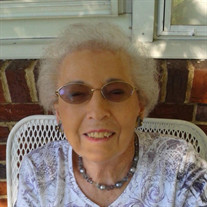 Mary Ellen Powell Bray, 92, formally of Danville, VA went home to be with her Lord on Saturday, September 26, 2020 at Transitions Hospice Home in Raleigh, NC after being in declining health for several months. Mrs. Bray was born on December 2, 1927, in Pittsylvania County, VA, daughter of the late John Willie Powell and Janie Elizabeth Myers Stowe Powell. She grew up in the Danville area until she moved to Charlotte, NC in 1965. She worked as an accounts payable supervisor at J. B. Ivey’s /Dillard’s in Charlotte, NC for over thirty years. After her retirement they moved back to Danville in 1999 until her health failed. She was a faithful member of Third Ave Congregational Christian Church where she was a member of the Chapel Bible Class, the Circle Group, and Young at Hearts Seniors. She enjoyed attending church as much as possible, spending time with her family and shopping. She also enjoyed doing crossword puzzles, word finds and jigsaw puzzles in her spare time. On August 9, 1947 Mrs. Bray married the late Calvin “Adie” Andrew Bray who died on September 16, 2007. In addition to her husband and parents she was predeceased by siblings, Tom Stowe, Nellie Guinn, Lucille Motley, Mamie Martin and Virginia Motley. Survivors include her son, Mark Bray and wife Karen Morrison of Wendell, NC; grandchildren, Miles Hanes of Charlotte, NC and Julia Bray of Raleigh, NC; brother, James Powell of Gloucester, VA; special nieces, Lynn Crawford and Judi Brown; and many other nieces, nephews and friends. A celebration of life will be conducted on Thursday, October 1, 2020 at 2:00 p.m. at the Wrenn-Yeatts Westover Chapel with the Reverend Frederick J. Vicks officiating. A private interment will follow in Highland Burial Park. The family is requesting attendees of the service to wear casual and colorful attire. In lieu of flowers the family suggest that memorial donations be made in memory of Mary to the National Kidney Foundation at 30 East 33rd Street, New York, NY 10016. Wrenn-Yeatts Westover Chapel is respectfully serving the Bray family.

Mary Ellen Powell Bray, 92, formally of Danville, VA went home to be with her Lord on Saturday, September 26, 2020 at Transitions Hospice Home in Raleigh, NC after being in declining health for several months. Mrs. Bray was born on December... View Obituary & Service Information

The family of Mary P. Bray created this Life Tributes page to make it easy to share your memories.

Send flowers to the Bray family.