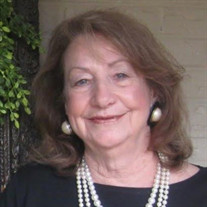 Mary “ Nanny” Nowlin West, 88, of Spartanburg, SC, went home to be with her Lord on October 13, 2021, in Spartanburg, SC, after a period of declining health joining her late husband Donovan West. Mary was born in Danville, Va. on December 5, 1932, the daughter of the late Eulas Aubrey and Ella Bowers Nowlin. She was a graduate of the former Schoolfield High School, class of 1951. On October 4, 1952, Mary married her high school sweetheart Don West. Mary followed Don to many cities in the southeast supporting his textile career including Danville, Abbeville, Greensboro, Spartanburg, Fort Mill, and Thomaston, before settling in Spartanburg upon his retirement to be close to her children and grandchildren. Mary was an avid “antiquer”. At each stop, she set up antique shops, including one in Warm Springs, Ga. She made many lasting friendships in each town along the way. She was the ultimate family matriarch and Sunday dinners at her home we always a treat for family and friends. Family, friends and strangers alike were always welcome in her home and at her table. Mary is survived by her daughter, Janine Fleming (Charles), her daughter-in-law Drucilla West, grandchildren Brent W. Fleming ( Melissa), Ella Ashley Fleming Stephens ( Brandon), Donovan S. West III (fiancé Melina), Ande Joan West, and great grandchildren Charles Patrick and Emmie Lucia Fleming, and Jack Herbert and Maisie West Stephens. She is also survived by her sister Patsy Lowery (Lindy). She was predeceased by two sons, Donovan S. West, Jr. and Richard “Andy” West, and siblings Jack Nowlin, Eva Landrum, Ruby Adkins and Peggy Adkins. Mary was a member of Cannons Campground United Methodist Church. In lieu of flowers, memorials may be made to Spartanburg Regional Hospice 686 Jeff Davis Dr. Spartanburg, SC 29303. Funeral services will be conducted on October 23, 2021 at 2:00 p.m. at the Wrenn-Yeatts Westover Chapel. Interment will follow at the Danville Memorial Gardens The family will receive friends from 1:00 PM - 1:45 prior. The family will receive friends after the service at 101 Willow Ct. Ringgold, Virginia. Wrenn-Yeatts Funeral Homes is serving the West family.

Mary &#8220; Nanny&#8221; Nowlin West, 88, of Spartanburg, SC, went home to be with her Lord on October 13, 2021, in Spartanburg, SC, after a period of declining health joining her late husband Donovan West. Mary was born in Danville, Va.... View Obituary & Service Information

The family of Mary "Nanny" West created this Life Tributes page to make it easy to share your memories.

Send flowers to the West family.