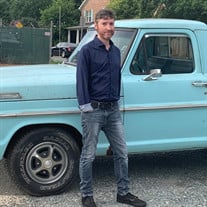 Neil Allen, 40, of Danville, VA died unexpectedly on Tuesday, January 26, 2021 at Sovah Health. Neil was born in Danville, VA on December 29, 1980, son of Ronald M. Allen and the late Cheryl Morgan Allen. He grew up in the Danville area where he graduated from George Washington High School Class of 1999 where he was a four-year member of the George Washington Symphony Orchestra. Neil then went on to graduate from Queens University in Charlotte, NC and received his B.S. degree in Corporate Communications. After graduation he used his education to pursue a career in I.T. Management; working for Queens University, Chapel Hill Public School System and Elon College in Burlington, NC. Neil’s greatest passion in life was art and music. His love for music started more than twenty years ago and he was a self-taught multi-instrumentalist; being able to play various instruments ranging from the guitar, piano, drums and harmonica. Throughout his musical career he became a singer and an accomplished songwriter. His most recent accomplishment being an album titled “P.M. Gold” which was entirely produced by Neil, even the album cover art. Neil’s talents will truly be missed by all that knew him. In addition to his father of Danville, VA, Neil is survived by his sister, Jennifer Allen of Danville; a niece, Jenna Thurman and fiancé, Charlie Haige of Roanoke, VA; and nephews, Stone Thurman of Los Angeles, CA and Noah Thurman of Danville, VA. A private graveside service will be conducted at Highland Burial Park. In lieu of flowers the family suggest that memorial donations be made to the Danville Humane Society at P.O Box 3352, Danville, VA 24543.http://www.dahsinc.com/site/572-2/ Neil wanted to be remembered as a musician, songwriter, singer and friend. Wrenn-Yeatts North Main Chapel is respectfully serving the family.

Neil Allen, 40, of Danville, VA died unexpectedly on Tuesday, January 26, 2021 at Sovah Health. Neil was born in Danville, VA on December 29, 1980, son of Ronald M. Allen and the late Cheryl Morgan Allen. He grew up in the Danville area where... View Obituary & Service Information

The family of Neil Allen created this Life Tributes page to make it easy to share your memories.

Send flowers to the Allen family.