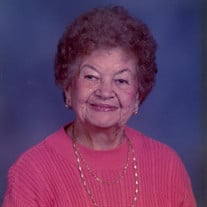 Nonnie McDaniel Burnett died on Wednesday, June 3, 2020, in Colonial Heights, VA, after a decline in health for the past few weeks. She was born on June 24, 1915, in Pittsylvania County, VA, a daughter of the late William Joel McDaniel and the late Cornelia Warren McDaniel. She was a lifelong resident of Danville until she relocated to Colonial Heights to be near her family. She was a lifelong and charter member of Keen St. Baptist Church, now United Baptist Church, where she was a member of the Young at Heart and Ruth Class. She worked for Dan River Mills until her retirement. She was also associated with the Wilkins family grocery business. In her spare time, she loved the beach, cruises, and traveling. She visited all fifty states, Canada, and Mexico. She is survived by a daughter, Carolyn W. Anckaitis, of Colonial Heights, Va.; two grandchildren, Elizabeth S. Fraher and N. Kieth Fraher; two great grandsons, Stefan W-L Fraher and Linwood K. Fraher; and numerous nieces and nephews. In addition to her parents, she was predeceased by her first husband, Sandy N. Wilkins, Jr.; her second husband, W. Nelson Burnett; a son, James Rebel Wilkins; two son-in-laws, Linwood L. Fraher, Jr. and LTC Ret. William H. Anckaitis; two grandsons, Linwood I. Fraher, III. and Mark E. Fraher; a brother, Richard M. Ingram; a sister, Ruth M. Pritchett; and beloved poodle Milo. A graveside service will be held on Tuesday, June 9, 2020 at 2:00 PM in Highland Burial Park with the Rev. Dr. Adam Woods officiating. The family would like to extend their thanks to Scottie and Kieth for all of the loving care provided to her, especially during the last several years of her life, and to the many friends in Danville who kept in contact with her following her relocation to Colonial Heights in 2013. Flowers are welcome or contributions may be made in her memory to United Baptist Church, 3400 US 29 BUS, Danville, VA, 24540. Wrenn-Yeatts North Main Chapel is serving the Burnett family.

Nonnie McDaniel Burnett died on Wednesday, June 3, 2020, in Colonial Heights, VA, after a decline in health for the past few weeks. She was born on June 24, 1915, in Pittsylvania County, VA, a daughter of the late William Joel McDaniel and... View Obituary & Service Information

The family of Nonnie McDaniel Burnett created this Life Tributes page to make it easy to share your memories.

Send flowers to the Burnett family.