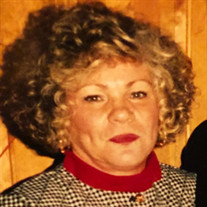 Peggie Marie Adkins Johnson, 79, of Danville, VA, died on Wednesday, March 17, 2021, at SOVAH Health-Danville, after a decline in health for the past few months. Mrs. Johnson was born on February 28, 1942, a daughter of the late Thomas “Tom” W. Adkins, Sr. and the late Myrtle Fain Adkins. She spent all of her life in the Danville area where she was a homemaker. In her spare time, she loved working in her yard and watching her flowers bloom in the Spring. She especially loved her dogs, Katelee and Brandy, and her birds. She attended New Life Community Church. On November 24, 1990, she married Roy W. Johnson, who survives of the residence. In addition to her husband, she is survived by two sons, Michael D. Barber (Valter S. Vieira) and Brian K. Barber (Rose Anne); and a daughter, Susan B. Hardy; four grandchildren, Kelly B. Irving, Jennifer Godfrey, Jessica Hardy, and Will Hardy; ten great grandchildren and one on the way; a brother, Thomas W. Adkins, Jr.; a sister, Merline Eveline Walton (Marvin), and several nieces and nephews. In addition to her parents, she was predeceased by two brothers, Curnel W. Adkins and Arnold T. Adkins. A private service will be held at a later date. In lieu of flowers, the family suggests that memorial donations be made to the Danville Life Saving Crew, 202 Christopher Lane, Danville, VA, 24541. Wrenn-Yeatts Westover Chapel is respectfully serving the Johnson family.

The family of Peggie Johnson created this Life Tributes page to make it easy to share your memories.

Send flowers to the Johnson family.