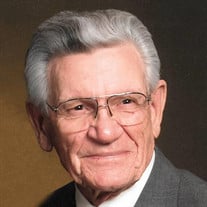 Philip Ray Reid, of 123 Matthew Circle, Danville, VA, went to be with the Lord on March 14, 2021, at the age of 90, after several months of declining health. He was born July 24, 1930, in Spray, NC. On July 29, 1950, he married Vera Womack Reid. They were married for 70 years. Philip grew up in the Schoolfield area of Danville and attended Schoolfield High School. He was a World War II veteran with a great love for his country, having served in the U.S. Marines. He also served in the U.S. Navy during the Korean Conflict. He began working for the U.S. Postal Service in Atlanta, GA, in 1958 and retired from the post office in Danville in 1987. He then worked as a courier for Sovah Danville Imaging Center until 1999. Philip loved the Lord and was a member of Vandola Baptist Church where he had served on various committees and as a deacon. He loved his family and was very proud of his grandchildren. He also enjoyed playing golf. He had no greater joy than taking his grandchildren to the golf course. Philip enjoyed people, never having met a stranger, and always had an optimistic view of life. He was predeceased by his mother, Evelyn Long Shorter; by his adoptive parents, Marvin and Molly Reid; and by an infant son. In addition to his wife, he is survived by his daughter, Karen Reid Brown and husband David of Danville. Also surviving are his two beloved grandchildren, Rachel Hartlee Brown and Reid Conley Brown. Services will be held on Tuesday March 16, 2021, at 2:00pm at Vandola Baptist Church conducted by Dr. Scott Bortz. A private burial will follow at the Blankenship-Thornton Cemetery in Kentuck. Social distancing will be observed and masks will be required for those attending the church service. For those who do not wish to enter the church, the service can be heard from your car radio in the church parking lot at 87.9 FM. The family wishes to thank all the wonderful friends, neighbors, medical personnel, and caregiver Chris Barley for their acts of kindness shown in recent months. In lieu of flowers, the family has requested donations be made to Vandola Baptist Church or to Wreaths Across America, an organization which remembers fallen U.S. veterans and honors those who serve. Wrenn Yeatts Westover Chapel is serving the Reid family.

The family of Philip Ray Reid created this Life Tributes page to make it easy to share your memories.

Send flowers to the Reid family.