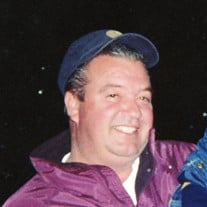 Randy Lewis “Mouse” Raynor, 60, of 102 Springfield Road, Danville, VA, went home to be with Lord suddenly on June 22, 2019, due to his injuries received in an accident. His health had been in a decline for the past several years. Randy was born in Danville, VA on August 26, 1958 a son of the late Lewis Preston Raynor and Shirley Dodson Raynor who survives of the residence. He had lived all of his life in Danville and Pittsylvania County where he was a graduate of Dan River High School. Randy had worked his entire life in car, truck and equipment sales. He was known as the “best car salesman in Danville” until his retirement due to health reasons. Randy had worked in the past for Woodall Chevrolet, Milam’s Truck Sales, Atkinson Truck Sales and Blackwell Dodge. Randy was a member of Mt. Tabor Baptist Church and a member of Tuscarora Country Club. He loved Winston Cup Racing, South Boston Racing, pond fishing and playing golf. Randy is survived by one son, Carson Lewis Raynor, of Providence, NC, his mother Shirley Raynor of Danville, VA, one sister Kim R. Shelton (Steve) of Dry Fork VA, his former wife, Angela DeMott Raynor and three nephews, Brent Shelton (Liz), Godson, Camden Shelton (Cassidy) and Kendall Shelton. He was predeceased by his father and one brother, Brian Keith Raynor. Funeral Services for Randy will be conducted on Monday, June 24, 2019 at 2:00 p.m. from the Wrenn-Yeatts North Main Chapel by Pastor Lee Harris and Reverend Carl Burger. Interment will follow in Highland Burial Park. The family will receive friends at the residence, 102 Springfield Road, Danville, VA 24540. Memorial donations be made to the Mt. Tabor Baptist Church, P.O. Box 103, Keeling, VA 24566 or to the Danville Life Saving Crew, 202 Christopher Lane, Danville, VA 24541. Wrenn-Yeatts North Main Chapel is respectfully serving the Raynor family.

Randy Lewis &#8220;Mouse&#8221; Raynor, 60, of 102 Springfield Road, Danville, VA, went home to be with Lord suddenly on June 22, 2019, due to his injuries received in an accident. His health had been in a decline for the past several years.... View Obituary & Service Information

The family of Randy Lewis Raynor created this Life Tributes page to make it easy to share your memories.

Send flowers to the Raynor family.