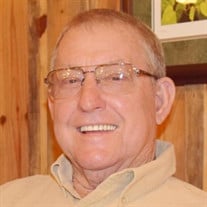 Robert Wayne Hill, 81, of Blanch, NC passed away on May 17, 2022. He was the son of the late William Lester and Willie Green McCann Hill of Blanch, NC. As a child, he attended Caswell County schools and graduated from Bartlett Yancey High School in 1958. He graduated with a degree in Criminal Justice from Piedmont Community College and enjoyed a 30 year career working with the NC Department of Corrections in Caswell County, where he started his career as a Correctional Guard and retired as Assistant Superintendent in 1991. After retirement from the NCDOC, he went back to work and retired from the City of Danville Virginia Adult Detention Center in 2003. He loved God, his church family, and was a lifelong member of Blanch Baptist Church where he sang in the church choir and served as a deacon for many years. He married his beloved, Elaine Marie Gibson, on November 27, 1963. They had four children, Phil Lee (1965), Robin Marie (1967), Gwen Lynette (1968) & Dana Elaine (1979). They celebrated 39 years together raising their three girls on the family farm and enjoyed spoiling many grandchildren before Elaine’s accidental death in 2003. Pa, as his grandchildren affectionately called him, always kept a stash of ice pops, cookies, ice cream, and candy to share with his grandkids. His father passed away when he was only 9 years old, so he found great joy in spoiling and indulging his grandchildren by generously buying them toys and things he never had as a child. He lovingly cared for his beloved mother until she unexpectedly passed away when he was 26 years old which broke his heart. He is survived by his dearly beloved companion and girlfriend, Lila; daughter Gwen and husband James of Boca Raton, FL and their four children Ashworth and husband Russell, Caitlin and husband AJ, Ben, Logan, grand dog Howie, and his newest addition, great granddaughter—his pretty little Harper girl as he called her. He is also survived by daughter, Dana and husband Eddie of Blanch, NC and their two children, Tyler and Elaina. Also surviving is grandson Nicholas and wife Sierra of Semora, NC and their three children, Alina, Jameson, and Bella. He is also survived by his brother, Frank and his wife Betty; sister-in-laws Sally (Fred), Shelby, Phyllis, Cricket, Wanda; brother-in-laws Paul (Jean) and Randy (Donna), and many nieces and nephews whom he loved especially Tony, Ray, and Troy who were raised on the adjoining family farm and became the sons he never had, but always loved. He was sadly predeceased by his beloved son Phil Lee (1965), wife Elaine (2003), daughter Robin (2003), and grandson Jacob (2003). He was known for his lifelong joy of rescuing stray animals including a little fawn deer who became a family pet. He leaves behind his dearly beloved dog “Greta”, cat “Bae”, and horse “Cracker” whom he loved very much. Robbie, as he was known to many in the community, was a lifelong avid outdoorsman who enjoyed hunting deer and turkeys. In his younger years, he loved fishing and playing with his good friend, Henry, on the banks of the Dan River and catching stripers. As a high schooler, he enjoyed playing baseball and later enjoyed playing in the adult 35 and older softball league where his team participated in and won many tournaments. He loved water sports and always looked forward to summer boating, water skiing, and jet skiing with family and friends on Hyco Lake. He was a motorcyclist and proud member of the Blue Knights International Law Enforcement Motorcycle Club. He enjoyed riding in poker runs for charity and attending NASCAR and motorcycle races with friends at South Boston, VIR, and Martinsville, especially with his good friend, Oliver. He had a passion for farming and over his life farmed tobacco, a variety of vegetables, and raised cows, pigs, and chickens on the family farm. One of his greatest accomplishments was building a fishing pond and later tearing down an old tobacco barn and building a rustic log cabin on the family farm that became a gathering place for fishing, family events, and holidays. In the summers, he enjoyed swimming at Lakewood Pool with his kids and grandchildren and eating homemade pineapple and banana ice cream made by his beloved wife Elaine and later, girlfriend Lila who was a great friend and also a lifelong native of his cherished hometown. They were both widowed and took care of each other in their golden years. He especially loved Lila’s little dogs, Becca “Ella Lea” and Masie Mae, who brought him a lot of joy and endless entertainment. He had a lot of energy, many hobbies, but especially loved his family and friends and being outdoors on the farm. He will be greatly missed by all who knew and loved him. His family wishes to express sincere gratitude to the Milton Volunteer Fire Department, Caswell County EMS, Person Memorial Hospital & Emergency Room, Bayada Home Healthcare, and his team of physicians at Duke University who provided excellent lung cancer care—specifically Dr. Jeffrey Crawford, PA Susan Blackwell, Dr. Christoper Kelsey, and Dr. Joseph Govert. An outdoor funeral will be held at 3:00 pm on Sunday, May 22, at Blanch Baptist Church, with Pastor Keith Murray officiating, beneath the shade trees where he will be laid to rest next to his beloved wife, Elaine. A viewing will be held one hour prior to the service at the church and at other times the family will receive friends at the residence. Wear your camouflage, blaze orange or yellow which were his favorite colors. In lieu of flowers, please consider making a donation to the Milton Volunteer Fire Department or Blanch Baptist Church. A special thank you to Johnny Brandon of Blanch, who was like a son to Daddy, and all who prayed, visited, and helped take care of since his cancer came back in 2020. Wrenn-Yeatts Memorial Funeral Home Yanceyville is serving the family.

Robert Wayne Hill, 81, of Blanch, NC passed away on May 17, 2022. He was the son of the late William Lester and Willie Green McCann Hill of Blanch, NC. As a child, he attended Caswell County schools and graduated from Bartlett Yancey High School... View Obituary & Service Information

The family of Robert Wayne Hill created this Life Tributes page to make it easy to share your memories.

Send flowers to the Hill family.