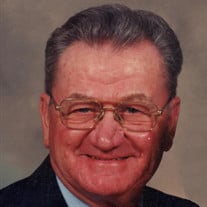 Robert Edward “Bobby” Powell, 91, of 488 Tunstall High Road, Dry Fork, VA, went home to be with his Lord and Savior on Tuesday, January 25, 2022 at SOVAH Health of Danville after a decline in his health for the past six months. Bobby was born in Danville, VA on March 18, 1930, a son of the late George Edward Powell and Gladys Payne Powell. He lived his entire life in Dry Fork, VA and was retired as a Paint Contractor. Bobby was a member of Sharon Baptist Church where he served as a Sunday School Teacher, Deacon, and several other committees over the years. He was a charter member of the Tunstall Fire & Rescue, and he was a founding member of the Tunstall Trio. On November 25, 1950 he was married to Helen Gunnell Powell, who survives. In addition to his wife, of the residence, Bobby is survived by a two sons, Bobby Wayne Powell (Sabrina) of Reidsville, NC, and Steven Powell (Kelly) of Danville, VA; two daughters, Connie Reynolds (Bobby) of Danville, VA, and Nancy King (Keith) of Moneta, VA; two sisters, Betty Jean Booth of Ringgold, VA, and Marie Burke (Carl) of Dry Fork, VA; several grandchildren, great grandchildren. A son, Michael Edward Powell, a brother, Johnnie Morris Powell, an infant sister, Lucy Ann Powell, and a grandson, Jonathan Wayne Powell, predeceased him. Funeral Services will be held on Saturday, January 29, 2022 at 2:00 P.M. at Sharon Baptist Church 241Stony Mill Rd Danville, VA 24540 with Pastor Ray Lawton officiating. Interment will follow in Danville Memorial Gardens. The family will receive friends on Saturday, January 29, 2022 at Sharon Baptist Church from 12:00 until 2:00 P.M. and at other times at the residence. Also, the family suggests memorials may be made to the Tunstall Fire & Rescue, P.O. Box 575, Danville, VA 24543. Wrenn-Yeatts Westover Chapel is serving the Powell family.

Robert Edward &#8220;Bobby&#8221; Powell, 91, of 488 Tunstall High Road, Dry Fork, VA, went home to be with his Lord and Savior on Tuesday, January 25, 2022 at SOVAH Health of Danville after a decline in his health for the past six months. Bobby... View Obituary & Service Information

The family of Robert Edward Powell created this Life Tributes page to make it easy to share your memories.

Send flowers to the Powell family.