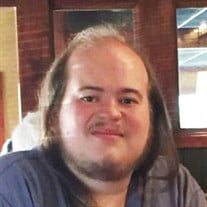 Robert Thomas Pressley, 27, of 11180 Hwy 62 N, Milton, NC died on Friday, March 27, 2020 at UNC Chapel Hill after a brief but intense illness. Rob was born in Danville, VA on March 16, 1993, son of Robert Edward “Bo” Pressley and Elizabeth Marian Thomas Pressley. He spent most of his life in the Milton, NC area where he worked as a chef for Olive Garden in Danville, VA. Rob was a member of the former Troop 390 of Yanceyville achieving the rank of Eagle Scout and was inducted into the Order of the Arrow and Brotherhood. He also attended Milton United Methodist Church. Rob was quick to share a laugh and never met a stranger. He made friends wherever he went and treasured their friendship. He enjoyed music festivals, going hiking, and had a love for animals especially dogs and turtles. He also loved and enjoyed nature. In addition to his parents of the residence, Rob is survived by his brother, William Andrew Pressley of the residence; maternal grandmother, Marian Thomas of Milton, NC; Maribeth Compton Howe of Milton, NC who was like a sister to him; and many aunts, uncles, cousins, and friends. Rob was predeceased by his maternal grandfather, Walter Lea Thomas, III; and paternal grandparents, Harvey Edward Pressley and Sue Marie Taylor Pressley. The family is aware that there are many people who would like to attend his funeral, however, due to the constraints of public gatherings during the COVID-19 outbreak, there will be a private memorial service conducted at Milton United Methodist Church, in Milton, NC. For the time being, the family encourages you to leave your memories and condolences online at www.wrenn-yeatts.com The family will be at the residence, 11180 Hwy 62 N Milton, NC 27305. Wrenn-Yeatts Memorial Funeral Home Yanceyville, NC is respectfully serving the Pressley family.

The family of Robert Thomas Pressley created this Life Tributes page to make it easy to share your memories.

Send flowers to the Pressley family.