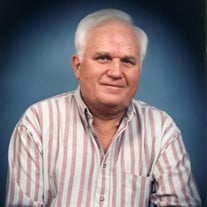 Roger Earl Parrish, 76, of Danville, passed away on April 2, 2021 at his residence that he loved after a courageous battle with kidney disease. Roger was born in Guilford County, NC on May 19, 1944, a son of the late Kemp Wayne Parrish and Oletha Brown Parrish. He spent his childhood in Hampton, VA close to the beach that he loved. He came to Danville to attended DTI where he met the love the love of his life Judy, his wife of 54 years. He remained in Danville and they had two sons, David and Adam, both now deceased. In addition to his parents and two sons, David Scott Parrish and Adam Joseph Parrish he was predeceased by a brother, Leon Parrish, a sister, Joann Hill, and a niece, Amy Roberts. He retired from the forming department of Corning Glass Works and was a member of the Corning Retirees Club where he faithfully attended the monthly luncheon meetings. He made many lifelong friends at Corning. Roger was an avid hunter, golfer, and fisherman. He loved to be outdoors and spent many happy times at his hunting clubs with his friends Jerry and Earnest. He loved the Danville Braves baseball team and spent many happy times at the ballpark. He also enjoyed attending the sporting events his nieces and nephews were playing. Survivors include his loving wife, Judy Parker Parrish, three nephews, J.P. Hill, Kemp Parrish, Christopher George, sister-in-law, Pamela George (Connan), brother-in-law, Jerry Hill, and their families. One aunt and many cousins also survive him. A memorial service will be held on Thursday, April 8, 2021 at 2:00 PM at the Wrenn-Yeatts Westover Chapel conducted by the Rev. Wayne Aaron. The family will receive friends one hour prior to the service at the funeral home. Special thanks go out to the Blairs Dialysis Nurses & Staff and to Commonwealth Hospice with a very special thank you to nurse Frankie. Also a special thank you to our friend Brenda. In lieu of flowers, memorial donations can be made to the Danville Area Humane Society or to God’s Pit Crew. Wrenn-Yeatts Westover Chapel is respectfully serving the Parrish family.

Roger Earl Parrish, 76, of Danville, passed away on April 2, 2021 at his residence that he loved after a courageous battle with kidney disease. Roger was born in Guilford County, NC on May 19, 1944, a son of the late Kemp Wayne Parrish and Oletha... View Obituary & Service Information

The family of Roger Earl Parrish created this Life Tributes page to make it easy to share your memories.

Send flowers to the Parrish family.