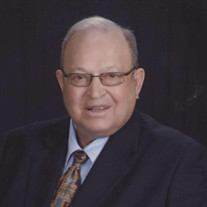 Ronald Mack Doss, of Danville, went home to be with his Lord and Savior, on Wednesday morning, August 5, 2020, following a lengthy battle with numerous health issues. Ronnie was a warrior and fought each battle with vigor and determination. Throughout his most difficult surgeries and treatments, he never gave up, and never lost his sustaining faith in God. He was a long-time member of North Main Baptist Church. Born on August 13, 1941, in Pittsylvania County, VA, Ronnie was the first of four children born to the late William McKinley Doss and the late Octavia Gibson Doss. From an early age, Ronnie had a passion for automobiles, trucks, sports vehicles, racing and NASCAR. His early career was with Barkhouser Motors. His enduring enthusiasm for racing led him to a position with NASCAR where he was paid to do the work he loved. Working for NASCAR was a labor of love and a devotion to duty. He was also a member of the Improved Order of Redman, Poquoson Tribe # 124. Ronnie is survived by the love of his life, his wife of 58 years, Diane T. Doss; his son, Ronald Mack Doss, Jr. of Kingwood, Texas; three grandchildren, Ronald Mack (Trey) Doss, III, Grayson Doss, and Caroline Doss, all of Kingwood. He is also survived by two brothers, Joe Edward Doss, and his wife Martha, and Donald Jerry Doss, both of Pittsylvania, one sister Shirley Doss Hubbard, of Danville, and a half-sister Ginnie Doss Wolershine. He was predeceased by a half-sister, Jackie Doss Pennington. Also left to miss their beloved brother-in-law are his wife’s sister, Jackie T. Smith and her husband, Dale Smith, as well as numerous nieces, nephews, and cousins, all of whom he dearly loved and whose company he enjoyed immensely. Ronnie was very family oriented and loved family gatherings and outings. He was a people person and could engage with anyone whose life touched his. He will be missed by many. A memorial service will be held on Friday, August 14, 2020 at 6:00 PM at the Wrenn-Yeatts Westover Chapel with the Reverend Mike Hearp officiating. The family suggests that in lieu of flowers, donations be made to the Danville Humane Society, P.O. Box 3352, Danville, VA, 24543. Wrenn-Yeatts Westover Chapel is serving the Doss family.

Ronald Mack Doss, of Danville, went home to be with his Lord and Savior, on Wednesday morning, August 5, 2020, following a lengthy battle with numerous health issues. Ronnie was a warrior and fought each battle with vigor and determination.... View Obituary & Service Information

The family of Ronald Mack Doss created this Life Tributes page to make it easy to share your memories.

Ronald Mack Doss, of Danville, went home to be with his Lord...

Send flowers to the Doss family.