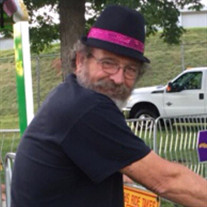 Ronnie Lee Wilkerson, 67, of 33 Old Halifax Rd., Danville, VA, died unexpectedly on Thursday, January 7, 2021, at Salem VA Medical Center, Salem, VA. Mr. Wilkerson was born in Danville, VA, on June 14, 1953, a son of the late Charlie B. Wilkerson and the late Iris Delphena Hutchinson Wilkerson. He lived most of his life in the Danville area where he worked for Amthor International until his retirement. He was a veteran of the United States Navy and proudly served his country during the Vietnam War. He loved spending time with his family, especially his many grandchildren. On November 1, 1991, he married Rebecca Wilkerson, who survives. In addition to his wife, he is survived by three daughters, Stacy Nunley, Michelle Nance (Joshua), and Deana Morrison (Carlton); seven granddaughters, Kathryn Nunley, Abigail Nunley, Gabriella Nunley, Alaina Nunley, Jordan Nunley, Maia Nunley, and Olivia Hodge (Kyle); two grandsons, Nathaniel Nunley and Roland Nance; a great grandson, Ezra Hodge; a brother, Jerry Wilkerson (Selona); three nieces, Robin (Eddie), Tina, and Joanna (Dave); and a nephew, Bobbie. In addition to his parents, he was predeceased by a son-in-law, Reverend Gregory S. Nunley; a grandson, Kyle Taylor; and a sister, Judy Pruitt. A Memorial Service will be held on Saturday, January 16, 2021 at 10:00 AM at State Line Baptist Church, 651 Holland Rd, Danville, VA, with his daughter Stacy Nunley officiating. Military Honors will be conducted by the United States Navy Honor Guard. The family will receive friends one hour prior to the service at the church and at other times will be at the residence. A private interment will take place at a later date in Danville National Cemetery. In lieu of flowers, the family suggests that memorial donations be made to Wrenn-Yeatts Funeral Homes, 703 N Main St., Danville, VA, 24540, to help with funeral expenses. Wrenn-Yeatts North Main Chapel is serving the Wilkerson family.

The family of Ronnie Lee Wilkerson created this Life Tributes page to make it easy to share your memories.

Send flowers to the Wilkerson family.