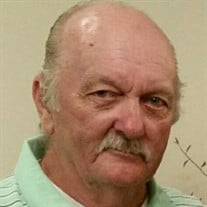 Russell Allen "Al" Jarrett, 76, of Danville, VA went home to be with his Lord on Tuesday, December 7, 2021 at his residence. Al was born on October 13, 1945 in Danville, VA, a son of the late Russell Alma Jarrett and Evelyn Barker Grogan Eanes. He spent all of his life in the Danville area where he was a truck driver for various companies with Mabes Trucking in Eden, NC being his last place of employment before his retirement. He attended West Fork Pentecostal Holiness Church. Al was known as an outdoors man whose passion was riding his motorcycle. In addition to his parents, Al was predeceased by a son, Ronald Martinez; and his grandparents, Lottie Mae Cathcart and Emma Fulcher. Survivors include, his best friend and caregiver, Frances C. Jarrett of Danville, VA; his sons, Rusty Jarrett (Carolyn) of Cascade, VA, Mark Jarrett of Danville, VA, Lee Martinez of Danville, VA, Robert Martinez of Danville, VA; his daughter, Christy Long of Cascade, VA; his brother, Terry Jarrett (Sharon) of Danville, VA; his sisters, Valerie Oakes (Maurice) of Orange Park FL, Dale Snead (Eddie) of Danville, VA, Shirley Eanes-Elliott (Buddy) of Danville , VA, Jane Williamson (James Shepherd) of Moneta, VA, Karen Staton of Danville, VA, Lisa Jackson (Doug) of Chatham, VA, Michelle Walker (Warren) of Dry Fork, VA; his step-mother, Barbara Jarrett of Danville, VA; a special friend, Pat Jarrett of Danville, VA; eleven grandchildren; two great grandchildren; and numerous nieces and nephews. A graveside service will be conducted on Friday, December 10, 2021 at 2:00 PM at Danville Memorial Gardens with Pastor Matthew Pacifico officiating. The family will receive friends prior to the service from 12:30 PM to 1:30 PM at the Wrenn-Yeatts Westover Chapel and at other times the family will be at his sister’s residence, Shirley Eanes-Elliott at 321 Wilson Rd, Danville, VA 24541. The family would like to express a sincere Thank You to the staff of Commonwealth Hospice for all the love and care given to Al during this difficult time. Memorial donations can be made to Commonwealth Hospice. Wrenn-Yeatts Westover Chapel is respectfully serving the Jarrett family.

Russell Allen "Al" Jarrett, 76, of Danville, VA went home to be with his Lord on Tuesday, December 7, 2021 at his residence. Al was born on October 13, 1945 in Danville, VA, a son of the late Russell Alma Jarrett and Evelyn Barker Grogan Eanes.... View Obituary & Service Information

The family of Russell Allen "Al" Jarrett created this Life Tributes page to make it easy to share your memories.

Send flowers to the Jarrett family.