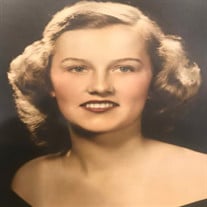 Ruth Lee Milam Johnson, 88, formerly of Ringgold, VA, departed this earth on Thursday, October 24, 2019, at Sunrise Villa, Richmond, VA, after a decline in health for the past two years. Born the seventh of nine daughters, on December 19, 1930, to the late Charlie Lee Milam and the late Virginia Booth Milam, she grew up on the family tobacco farm in Ringgold, Virginia. She graduated from Dan River High School when she was sixteen and went to Averett College for Secretarial Studies. She graduated at eighteen and got a job working for a pathologist in Danville. In April of 1950, she married Julian Bentley Johnson, who died on August 12, 2010, after sixty years of marriage. Since her husband was an Army man, they moved all over the place. If Dad was the Major, Mom was certainly the General. She organized moves across oceans, kept her "troops" well-fed, well-dressed, and well-behaved; and managed to pursue her own interests as well. She took French cooking classes, learned how to tailor her own clothes, studied ballet, was a Master Gardener, and made beautiful hand-made quilts as part of the Oak Mountain Quilters Guild, just to name a few things that she tackled in her lifetime. After her return to Danville in 1987, she was an active member of Wesley Chapel United Methodist Church, where she was a Sunday School Teacher and Choir member. One thing that she always emphasized to people was that it was important to learn something new every day. She had a thirst for knowledge that turned her into a voracious reader and an adventurous traveler. Mom and Dad traveled all over the world including Russia, Turkey, all over Europe, and the United States. She went back to college and graduated with a BA in History from Thomas Edison State College in 1983. During her final weeks, you could find several books that she had been reading, including a book about the Middle Ages, a book about General Wellington, and of course her well-worn Bible. Survivors include two daughters, Elizabeth Blanks (Joseph), of Chesterfield, VA, and Katherine Haas (Richard), of Richmond, VA; two sons, Paul Johnson (Cindy), of Bethlehem, PA, and David Johnson (Carol), of Seattle, WA; five grandchildren, Steven Haas, Joseph B. Blanks, Julia Johnson, Christopher Johnson, and David Johnson; six great grandchildren; two sisters, Mary Ann Burton and Sallie Atkinson; and numerous nieces and nephews. In addition to her parents and husband, she was predeceased by six sisters, Mildred Evans, Dorothy Dameron, Hazel Gibson, Louise Fagan, Nancy Compton, and Rubye Moore. Funeral services will be held on Monday, October 28, 2019 at 2:00 PM at the Wrenn-Yeatts Westover Chapel conducted by Pastor Jennifer Coffey. Interment will follow the service in Highland Burial Park. In lieu of flowers, the family suggests that memorial donations be made to the Crohn's & Colitis Foundation, P.O. Box 1245, Albert Lea, MN, 56007, or to Averett University, Institutional Advancement, 420 West Main Street, Danville, VA, 24541. Wrenn-Yeatts Westover Chapel is serving the Johnson family.

Ruth Lee Milam Johnson, 88, formerly of Ringgold, VA, departed this earth on Thursday, October 24, 2019, at Sunrise Villa, Richmond, VA, after a decline in health for the past two years. Born the seventh of nine daughters, on December 19, 1930,... View Obituary & Service Information

The family of Ruth Lee Milam Johnson created this Life Tributes page to make it easy to share your memories.

Send flowers to the Johnson family.