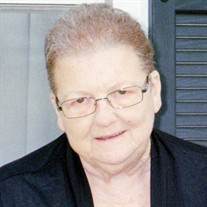 Sadie Eileen Brewer Vestal, 80, of 4253 N.C. Hwy. 86-South, Yanceyville, NC passed away in her sleep on Friday, January 22, 2021 while a patient at Person Memorial Hospital following years of declining health. Mrs. Vestal was born in Wilkes County, NC on October 25, 1940 – a daughter to the late Roy Edgar Brewer and late Annie Cohee Brewer. She moved to Caswell County in 1990 with her late husband, Willie Gerald Vestal who passed on January 2nd of this year. Mrs. Vestal earned her Associates Degree in Nursing in 1975 at Durham Technical Community College and worked as a Licensed Practical Nurse (LPN) for more than a decade. In 1980, she enrolled in North Carolina Central University (NCCU) in Durham and received her Bachelor of Science Degree in Nursing in 1986. After obtaining the highest passing score of anyone who took the NC nursing licensing examination that summer, she became a licensed Registered Nurse (RN) in North Carolina. She later obtained her RN license in Virginia & Connecticut as well. For the last ten years of her nursing career, she worked as a correctional healthcare nurse for the Durham County Detention Facility until her retirement in November of 2002. Mrs. Vestal is survived by two sons – Randy Gerald Vestal of Yanceyville, NC as well as Roger Keith Vestal and wife Jenny of Timberlake, NC. Despite working full-time nighttime jobs during much of her children’s minor years, Mrs. Vestal was very engaged in her sons’ lives and activities outside the home, including volunteering as a den mother for Boy Scout Troop #946 in Old Richmond, NC where she loved to interact with the youth but most importantly with her sons. While attending NCCU, Mrs. Vestal had the unusual opportunity to attend the same college classes as one – and at times both – of her sons who were also enrolled at the same university. She is also survived by one brother, Lewis (Jack) Henry Brewer and wife Judy of Daytona Beach Shores, FL, and two sisters – Virginia Brewer Ellington and husband William, and Peggy Ann Brewer Danner and husband Robert – all of Winston-Salem, NC. She was predeceased by one sister, Mary Lee Brewer Howerton formerly of Tampa, FL. Due to the COVID 19 Restrictions, a Private Graveside Service for Mrs. Vestal will be held sometime during the week of January 24th. In lieu of flowers, in remembrance of the late Mrs. Vestal, memorials may be made to the American Cancer Society in memory of her late husband who was a long-term kidney cancer survivor. It is the sincere hope that a Remembrance Ceremony celebrating the lives of both Sadie Eileen Brewer Vestal and her late husband Willie Gerald Vestal can be held later this year once circumstances return to normal and mass gatherings can be conducted safely. Wrenn-Yeatts Yanceyville is respectfully serving the Vestal family.

The family of Sadie Vestal created this Life Tributes page to make it easy to share your memories.

Send flowers to the Vestal family.