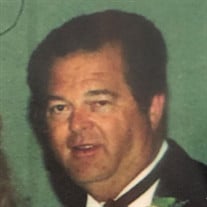 Sammy Lee Wallace, 74, of 222 London Bridge Drive, Danville, VA passed away on Wednesday, May 18, 2022 at Beloit Memorial Hospital in Beloit, WI after a brief decline in health. Sammy was born on August 29, 1947 in Danville, VA, a son of the late D.T. Wallace and Janie Elizabeth Ridgeway Wallace. He spent all of his life in the Danville area where he was employed as a recruiter for Hansen & Adkins Auto Transport. Sammy proudly served his country in the United States Army and was a member of the Fraternal Order of the Eagles. He was known for his love of Harley Davidson Motorcycles and he also enjoyed racing his modified racecar. Sammy had a big heart who loved to help anyone he could, he will be greatly missed by all that knew him. On July 29, 2000, he married, Patricia K. Wallace, who survives of the residence. In addition to his wife, Sammy is survived by his children, Sammy Wallace, Jr. of Bassett, VA, Sandra Wallace of Danville, VA, Conny Wallace of Danville, VA and Ronny Wallace of Troutville, VA; his step-children, Tom Crews of McLeansville, NC, Brandon Crews of Gibsonville, NC, Bill Crews, IV (Ariana) of Coeur D’Alene, ID and then Carrie Keller (David), Danville, VA; ten grandchildren, eight step-grandchildren, several great grandchildren; and his faithful companion, Halo. In addition to his parents, Sammy was predeceased by his brother, Danny Wallace; and his faithful companion, Casper. A funeral service will be conducted on Sunday, May 22, 2022 at 3:00 P.M. at the Wrenn-Yeatts Westover Chapel with Pastor Gary Tucker officiating. Interment will follow in Highland Burial Park. The family will receive friends prior to the service from 2:00 PM to 3:00 PM at the funeral home. Wrenn-Yeatts Westover Chapel is respectfully serving the Wallace family.

Sammy Lee Wallace, 74, of 222 London Bridge Drive, Danville, VA passed away on Wednesday, May 18, 2022 at Beloit Memorial Hospital in Beloit, WI after a brief decline in health. Sammy was born on August 29, 1947 in Danville, VA, a son of the... View Obituary & Service Information

The family of Sammy Lee Wallace created this Life Tributes page to make it easy to share your memories.

Send flowers to the Wallace family.