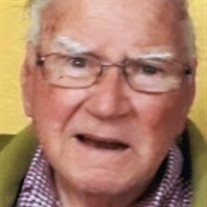 Samuel Jackson “Sam” Smith, 81, of Providence, NC, passed on to his eternal home Saturday, February 22, 2020 at Sovah Health in Danville, Virginia with family by his side. Sam was born April 25, 1938 in Halifax County, Virginia to Andrew Jackson “Shug” Smith and Elsie Irene Clay Smith. He spent most of his life in Caswell County, N.C. He was preceded in death by his wife Mary Anne Butts Smith, brothers George Smith and James H. Smith, sisters Beatrice Norton, Lucy Langford, Effie Wells and Myrtle Dunevant. He is survived by a sister Barbara “Babe” Wyatt, a brother Edward H. “Pete” Smith, both from Providence, N.C., a sister-in-law, Sue Butts Dix (husband Chuck) of Blanch, N.C. He is also survived by numerous nieces and nephews. Sam was well known throughout the Providence and Yanceyville area. His daily routine included on most days visiting Hardee’s in Yanceyville with his breakfast friends, then off to the Caswell County Senior Center to exercise and have lunch as well as harass Jeannine, the Senior Center Director. Sam had many friends at the center. He was known for smelling a cookie all the way to the other end of the center. After his Senior Center visit, he was off to Ronnie Carroll’s Convenience Mart in Providence. Sam was a longtime member and former deacon in Community Baptist Church. Sam was a Christian who loved his church and his worship time there. Sam worked 44 years in Dan River Mills in Danville, Va. Funeral services will be held Tuesday, February 25, 2020 at 3:00 p.m. at the Community Baptist Church, 3050 Old NC Hwy 86 North, Yanceyville, N.C. with Pastor Wayne Jones and Pastor John Crews officiating. Visitation will begin at 1:30 p.m. prior to the funeral service. The family will be receiving friends at other times at the residence. Interment will follow in the church cemetery. In lieu of flowers donations can be made to Community Baptist Church, 3050 Old NC Hwy 86 North, Yanceyville, N.C. in memory of Sam. A special thanks goes to his caregivers, Cathy and Ester for their wonderful care. Wrenn-Yeatts Memorial Funeral Home Yanceyville is respectfully serving the Smith family.

The family of Samuel "Sam" Jackson Smith created this Life Tributes page to make it easy to share your memories.