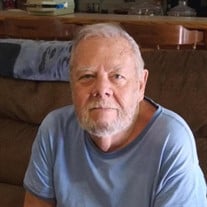 Spencer Eugene Adkins “Gene”, 82 of Danville, departed this life on Saturday, December 19, 2020 at Sovah Health- Danville after battling Covid-19 for the past month. Gene was born in Ferrum, VA on June 5, 1938 a son of the late Spencer Edward Adkins and Belva Sloan Adkins. Gene retired from Goodyear Tire & Rubber Company after 27 years of service. He was an avid bowler and enjoyed his yearly trips to Florida. He was a member of the Goodyear Retires Club, the Improved Order of Redman Poquoson Tribe # 124. He was of the Baptist faith. On March 29, 1997 he married the love of his life, Brenda Salmon Adkins, who survives. They enjoyed many years of traveling the US, Mexico and the Caribbean. Survivors also include two sons, Keith Adkins, Ronnie Adkins (Cindy), a step-son, Zachary Salmon (Vicki), a step-daughter, Tondya Hoyer, his beloved three sisters, Barbara Craig, Linda Hilliard (Wayne), Wanda Riddle; a special granddaughter, Jessica Reavis, four grandsons, three step-grandchildren, four great-grandchildren, one great-great grandchild and a special cousin, Mike Adkins (Sue). In addition to his parents he was predeceased by two brothers-in-law, Harry A. Craig, Jr. and Mike Riddle. A memorial service will be held on Wednesday, December 23, 2020 at 11:00 AM at the Wrenn-Yeatts Westover Chapel conducted by the Rev. Billy Hedrick. In lieu of flowers and food, the family suggests that memorial donations be made to God’s Pit Crew or to a charity of your choice. Wrenn-Yeatts Westover Chapel is serving the Adkins family.

The family of Spencer Eugene Adkins created this Life Tributes page to make it easy to share your memories.

Send flowers to the Adkins family.