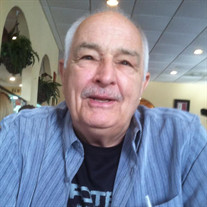 On Thursday, March 17, 2022, Stephen Brian Walley, 79, passed away from this earth into the arms of his savior, Jesus Christ. He was born in Edon, Ohio on August 12, 1942, to Bernard James and Ruth Dunlap Walley. He was raised in Edgerton, Ohio. In addition to his parents he was predeceased by three brothers, Jim, John, and Jerry Walley all of Ohio; and a brother-in-law, David Saunders of Martinsville, VA. Mr. Walley is survived by his wife of 55 years, Melody Saunders Walley of the home; son, Brian S. Walley (Ginger) of Leasburg, VA; daughter, Stephanie W. Delcore (Scott) of Stafford, VA; four grandchildren, Madi and Aiden Walley, and Riley and Ryder Delcore; his sister, Kathy W. Grant (Dan) of Butler, Indiana; brother-in-law, L. Samuel Saunders (fiancée, Kathy Lester) of Danville, VA; and sister-in-law, Kathy Saunders-Robertson (Ben) of Martinsville, VA. Also left to remember him are many nieces and nephews of Indiana, North Carolina, Ohio and Virginia, along with his fur baby, ZZ. Mr. Walley was a graduate of Northern VA Community College and George Mason University. He taught for thirty years in Fairfax County before retiring to the Ringgold Community. He taught Vocational-Technical Education as well as Auto Mechanics and ICT. The life skills, job skills and various trades he taught to many students produced successful tradesman and business owners. He had a lifelong impact on his students, some who still stay in touch. He also had a passion for sports, teaching, coaching and supporting young people in his former Community of Sterling, Virginia. Mr. Walley has attended Ringgold Baptist Church for the last 24 years. Followings his wishes, there will be no funeral, but a family and friends’ celebration of life that will be held at a later date. Memorial donations can be made to Ringgold Baptist Church at 4620 Ringgold Church Rd, Ringgold, VA 24586. Wrenn-Yeatts North Main Chapel is respectfully serving the Walley family

On Thursday, March 17, 2022, Stephen Brian Walley, 79, passed away from this earth into the arms of his savior, Jesus Christ. He was born in Edon, Ohio on August 12, 1942, to Bernard James and Ruth Dunlap Walley. He was raised in Edgerton,... View Obituary & Service Information

The family of Stephen Brian Walley created this Life Tributes page to make it easy to share your memories.

Send flowers to the Walley family.