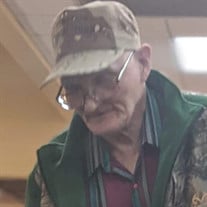 Teddie Lee Hendrix, 74, of 2634 Parks Springs Rd, Providence, NC, died on Wednesday, January 8, 2020. Mr. Hendrix was born in Qulin, MO, on December 20, 1945, son of the late Oliver Borne Warren Hendrix and the late Ellen Lorinda Waters Hendrix. He lived most of his life in Texas, where he worked in the Oil Industry until his retirement. He later moved to Providence, NC, in 2013. He was a member of the First Baptist Church of Yanceyville, NC. Survivors include, a daughter, Michele Edwards, of Tennessee; a son, Michael Hendrix, of Texas; a granddaughter, Rachel P. Haley (Jeb); a grandson, Daniel Wayne Hendrix; a great grandson, Benjamin Douglas Haley; a brother; and two sisters. In addition to his parents, he was predeceased by eight siblings; and a long-time companion, Wendy Meadows. Wrenn-Yeatts North Main Chapel is respectfully serving the Hendrix family.

The family of Teddie Lee Hendrix created this Life Tributes page to make it easy to share your memories.

Send flowers to the Hendrix family.