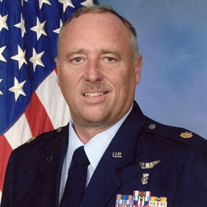 Retired Air Force Lt. Col. Timothy D. Howerton, age 59, of Pinetta, FL, passed away on Friday, March 15th, 2019 at Malcom Randall VA Medical Center in Gainesville, FL. Tim was born in Danville, VA on March 7, 1960 to Capt. C. Wayne & Peggy Bradley Howerton. Besides his parents he is survived by his wife Tammy Olsen Howerton, daughters Sarah Howerton Peck (Evan) & Jessica Howerton, both of Durham NC, son Keenan Evans & daughter Kira Evans both of Montgomery, AL, sister Angela Howerton of Glen Allen, VA, Aunts JoAnne Bradley Yeatts, Josephine Scearce & Charlotte Bradley and many special cousins. He was predeceased by his grandparents Rev & Mrs W.C. Bradley, Louise Wilson & Joe Howerton. Tim was a graduate of GW High School in Danville, his home church was the former Southhall Baptist Church. He enlisted in the Air Force in 1981 where he served for 37 years. After returning from Desert Shield/Desert Storm where he served as a Bioenvironmental Engineering Technician, he was selected to attend the Air Force PA program in 1992 and graduated from the program in 1994. Education includes 1994 Bachelor’s of Science degree in Physicians Assistant Studies, University of Nebraska Medical Center; 1997 Masters in Physician Studies, University of Nebraska Medical Center; 2009 Masters in Higher Education and Administration, University of Texas San Antonio. He received numerous Awards and Decorations over his career. He was lovingly known as “Hawkeye” to all of his military family. Among his love for his three labs, LuLu, Allie and Dilly, he also enjoyed being out on the lake in his boat, playing golf, Nebraska Football, Nascar and playing cards with his wife Tammy. A memorial service will be held at 2 pm, Saturday, April 6, 2019 at Faith Memorial Baptist Church, 7450 Martinsville Hwy, Danville, VA 24541 with the Rev Daniel Lackey officiating. The family will receive friends from 12:30 until 1:30 pm prior to the service at Faith Memorial Baptist Church. He will be buried in Arlington National Cemetery at a later time. In Lieu of flowers, the family suggests donations can be made to the Danville Life Saving Crew, 202 Christopher Lane, Danville, VA 24541, God’s Pit Crew, 2499 North Main Street, Danville, VA 24540 or to a charity of your choice. Wrenn-Yeatts Westover Chapel is serving the Howerton family.

The family of Lt. Col. Timothy D. Howerton created this Life Tributes page to make it easy to share your memories.

Send flowers to the Howerton family.