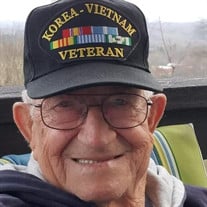 W.H. “Bill” Manville, 85, of Danville, VA went to be with the Lord and his heavenly family on Saturday, January 18, 2020. Born January 2, 1935 in Huntsville, TX, he was the son of the late William Haley Manville and Carrie Manville Stanley of Jacksonville, TX. He was also predeceased by his sisters Florene Rash of Houston, TX and Mozelle Lewis of Kannapolis, NC. He retired from the US Army with over 20 years of service. He served in France, Korea, Vietnam, Greenland, Germany and various US bases. He also worked for the Corps of Engineers for 9 years in which was a job he loved. He married the love of his life Shirley King after a three-month whirlwind romance on September 15, 1956. They were married for 63 wonderful years. Those left to cherish his memory are his wife Shirley King Manville; his daughter, Sharon Crossland and her husband Stuart; his son, Gary Manville and his wife Debra; granddaughters, Meagan Dull (Aaron) and Kayla Hayes (Alex); and great grandsons, Jackson and Charlie Hayes. Funeral services will be conducted on Saturday, January 25, 2020 at 2:00 p.m. at the Wrenn-Yeatts Westover Chapel with Dr. Scott Bortz officiating. Interment will follow in Danville Memorial Gardens with military honors conducted by the United States Army. The family will receive friends prior to the service from 12:30 p.m. to 1:45 p.m. at the funeral home and at other times will be at the family home, 2241 Moorefield Bridge Road, Danville, VA 24541. Wrenn-Yeatts Westover Chapel is respectfully serving the Manville family.

The family of W. H. "Bill" Manville created this Life Tributes page to make it easy to share your memories.

Send flowers to the Manville family.