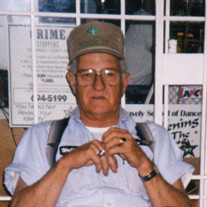 Wallace Neal Wade, 85, of 1323 Front St, Eden, NC, died on Sat., June 15, 2019 at Sovah Health in Danville, VA after being in declining heath for several months. Mr. Wade was born on August 14, 1933, son of the late Charlie Frank Wade and the late Virginia Empriss Williams Wade. He lived all of his life in the Ringgold, VA and the Providence, NC communities and in Eden, NC. Wallace had worked on a sales route for a vending service until his retirement. He proudly served his country in the United States Army. He was of the Baptist faith and had attended Community Baptist Church in Yanceyville, NC. Mr. Wade was first married to Clarice Hobbs Wade who died on September 21, 2002. He later married Mary Ashby Hazelwood Wade on October 19, 2005, who survives of the residence. In addition to his wife, Wallace is survived by a son, Jeff Wade of Danville, VA; stepson, Ricky Hazelwood and wife Norma of GA; step daughter, Dare H. Bernesa and husband Paul of Lexington, NC; one sister, Nancy W. James of Ringgold, VA; five grandchildren and seven great grandchildren. Wallace was also predeceased by one sister, Diane W. Richardson and a step son, Jimmy Hazelwood. A Memorial Service for Wallace will be conducted from the graveside on Friday, June 21, 2019 at 11:00 a.m. in Floral Hills Memory Gardens with the Reverend Austin Merricks officiating. Interment will follow with Military Honors conducted by the U.S. Army Honor Guard. The family will receive friends at the residence, 1323 Front St, Eden, NC 27288. The family request that in lieu of flowers that memorial donations be made to the Alzheimers Association of Danville/ Pittsylvania County, 308 Craighead Street, Suite 104, Danville, VA 24541. Wrenn-Yeatts North Main Chapel is respectfully serving the Wade family.

The family of Wallace Neal Wade created this Life Tributes page to make it easy to share your memories.

Send flowers to the Wade family.