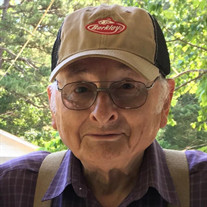 Wilbern N. Pendleton, 87, died peacefully at his home, in Ringgold, VA, on April 26, 2020. He was born on January 16, 1933, in Meadows of Dan, VA, a son of the late Roy L. and Lora V. Pendleton. The first part of his career was spent as a wholesale egg distributor. Later in life, he was owner and operator of Pendleton’s Garage. In his spare time, Wilbern enjoyed traveling, fishing, camping, and the outdoors. He had great Christian values and will be greatly missed. He leaves behind his wife of sixty years, Lois C. Pendleton; two sons, Brian C. Pendleton (Carla), of Timberlake, NC, and Kevin L. Pendleton, of Danville, VA; a granddaughter, Jade R. Pendleton, also of Timberlake, NC; and a number of nieces and nephews. In addition to his parents, he was predeceased by two brothers, Henry A. Pendleton and Roy E. Pendleton. A graveside service was conducted on Wednesday, April 29, 2020, at 11:00 AM in Danville Memorial Gardens with the Rev. George Breedlove officiating. Wrenn-Yeatts North Main Chapel served the Pendleton family.

The family of Wilbern N. Pendleton created this Life Tributes page to make it easy to share your memories.

Wilbern N. Pendleton, 87, died peacefully at his home, in Ringgold,...

Send flowers to the Pendleton family.