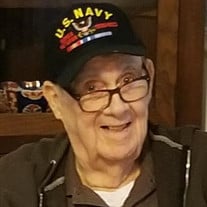 William “Bill” Vernon Ingram, Jr., 90, died on Wednesday, July 29, 2020 at Riverside Health and Rehabilitation Center in Danville, Virginia. He had been in declining health for the past several months. Bill was born on January 19, 1930 in Goldsboro, NC. He was the son of the late William Vernon Ingram, Sr. and Sterling DeBruhl Ingram. He grew up in Greensboro, NC. and lived most of his adult life there. He later retired to the mountains of Waynesville, NC. and then on to Chinquapin, NC. Bill proudly served his country in the United States Navy from 1950-53. A Korean War veteran he was deployed as a Petty Officer Third Class on the USS Bon Homme Richard and the USS Oriskany. While traveling cross country, on leave from San Diego, he met the beautiful Vivian Sellars Watkins. After a whirlwind courtship Bill and Vivian were married on July, 26, 1952. She was to be his wife of 67 years. In the 70’s Bill co-founded Guilford Mechanical Services where he worked until his retirement at the age of 62. Preceded in death by his wife Vivian, Bill is survived by sons, Bill Ingram III, his wife Stacy, Chris Ingram and his wife Karen. In addition, he is survived by his grandchildren, Harrison, Chase, Marley and Matt. He will also miss the company of his surviving brother Richard Ingram. A private memorial service will be conducted in Waynesville, NC at a date to be determined later. Wrenn-Yeatts North Main is respectfully serving the Ingram family.

William &#8220;Bill&#8221; Vernon Ingram, Jr., 90, died on Wednesday, July 29, 2020 at Riverside Health and Rehabilitation Center in Danville, Virginia. He had been in declining health for the past several months. Bill was born on January... View Obituary & Service Information

The family of William “Bill” Vernon Ingram Jr. created this Life Tributes page to make it easy to share your memories.

Send flowers to the Ingram family.