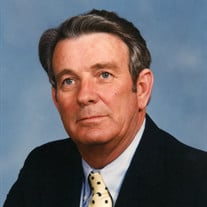 William Arthur (Billy) Pearson, Sr., 85, of 216 Stone Gate Way, Danville, VA went home to be with the Lord on June 25, 2019 after being in declining health for the past several years. Billy was born in Danville, VA on June 2, 1934, a son of the late Olie Denver Pearson and Mable Walker Pearson. He had lived all of his life in Danville where he had retired from the Roadway Express Company after 38 years of service. Billy was a member of Third Avenue Congregational Christian Church. He was a very loving husband, father and friend to his family. Billy was an avid Dale Earnhardt, Sr. fan. On June 16, 1962, Billy married the late Jeanne Barksdale Pearson, who died on June 14, 2016. Billy is survived by two sons, Larry Kent Pearson and wife Amy of Ringgold, VA, William A. Pearson, Jr. and wife Jerri of Danville, VA, one grandson, Austin Kent Pearson of Ringgold, VA, two sister-in-laws, June Marie Barksdale and Betty Jane Pearson both of Danville, VA. He was predeceased by parents, wife, one brother, Curtis Pearson, one half brother, James Barnes and one half sister, Myrtle Barnes. Funeral Services for Billy, will be conducted on Thursday, June 27, 2019 at 2:00 p.m. from the Wrenn-Yeatts Westover Chapel. Interment will follow in Highland Burial Park. The family will receive friends at the funeral home on Thursday from 12:30 to 2:00 p.m. and at other times the will be at the residence of Kent & Amy Pearson, 101 Willow Court, Ringgold, VA 24586 off State Route 62 South. Wrenn-Yeatts Westover is respectfully serving the Pearson family.

The family of William Arthur "Billy" Pearson Sr. created this Life Tributes page to make it easy to share your memories.

Send flowers to the Pearson family.