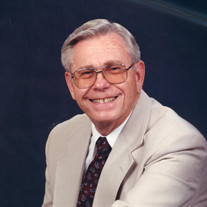 William Jackson (Bill) Soyars, 82, passed away on Thursday, January 7, 2021 after a long journey with dementia. He was born on January 3, 1939, in Danville, VA to the late Grover Evans Soyars and Elsie Ayers Soyars. On June 17, 1961 he married Judy Powell Soyars at Vandola Baptist Church. They were married for 59 years. Bill grew up in the Brosville area of Pittsylvania County and graduated from Brosville High School in 1957. He earned a B.S. degree in mechanical engineering from Virginia Tech in 1961 and in 1990 a M.A. degree in Christian Counseling from Liberty University. After several years working in textile engineering, Bill began his career as an instructor at Danville Community College. He taught Drafting and Design there from 1964 until he retired in 1996. Bill was ordained as a Baptist Minister in 1980 and served as a bi-vocational pastor or interim pastor to several local churches, including Laurel Grove Baptist and Shermont Baptist. In his retirement he was a member of Mount Hermon Baptist Church and the Able Servants Sunday School Class. Bill loved his God, his family, his country, and Virginia Tech Football. He held Virginia Tech football season tickets, and sat in the same seats, for over 50 years. In addition to his wife, he is survived by his three children – Kevin W. Soyars and wife Michelle of Winston-Salem, NC, Lori S. Cassada and husband Edward B., Jr. of Danville, VA and T. Fields Soyars and wife Jennifer of Waynesboro, VA. Also surviving are five grandchildren, who called him Poppy – Elizabeth C. Ballard (Glenn), Edward B. Cassada III (Brianna), Britton J. Soyars, Abigail G. Soyars and Emmeline K. Soyars. Bill is survived by one brother, Landon W. Soyars and wife Lois. Bill was predeceased by his parents and his sister, Joyce S. Hancock. Following a private burial, a memorial service, with The Reverend Ryan Riley presiding, will be held on Sunday, January 10 at 2:00 pm at Mount Hermon Baptist Church. Social distancing will be observed and masks are required. There will be no formal visitation. The family wishes to sincerely thank all the staff at Pearls of Life at Liberty Ridge in Lynchburg, VA. For the last two years they provided excellent love and care to Bill. We give God all the glory for helping us find this wonderful place for him. Memorial gifts may be made to the Alzheimer’s Association, 308 Craghead St., Suite 104, Danville, VA 24541, or the charity of your choice. Wrenn-Yeatts Westover Chapel is serving the Soyars family.

William Jackson (Bill) Soyars, 82, passed away on Thursday, January 7, 2021 after a long journey with dementia. He was born on January 3, 1939, in Danville, VA to the late Grover Evans Soyars and Elsie Ayers Soyars. On June 17, 1961 he married... View Obituary & Service Information

The family of William Jackson Soyars created this Life Tributes page to make it easy to share your memories.

Send flowers to the Soyars family.